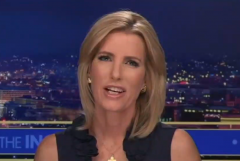 "When someone crosses our border illegally, their final destination should always be turning them around and sending them back to their home country," Sen. Cotton said. "They shouldn’t be putting them on a bus or an airplane at taxpayer expense to go wherever they want in the United States."

Ingraham cited December 2021 Department of Homeland Security data showing that the number of illegal migrants sent back to their home country is “very, very low.”

“So doesn’t this mean that they’re defying what the court said about ‘Remain in Mexico’ and they’re actually not doing that?” Ingraham asked Cotton.

Sen. Cotton responded by saying that the illegal immigrant adult men who are crossing the border are not running from anything, rather they are here because they are seeking American jobs.

“That’s in direct violation of the court’s order.”

Below is a transcript of this portion of “The Ingraham Angle”:

Laura Ingraham: "After a three-week delay, Border Patrol just announced that its officers arrested nearly 179,000 illegals in December. Now that’s up 142 percent since last December 2020, which of course is back when we had some sane immigration policies under Trump and instead of sending them all back to Mexico, the Biden Administration has taken a very different approach, as Fox’s own Bill Melugin witnessed in Brownsville, Tex. earlier today."

Bill Melugin: "These are all single adult men. They were just dropped off on an ICE bus here, as you can see, dozens of them. They’re just leaving this NGO directly across the street here. You can see these manila folders they’re holding. These are the travel documents they received from the NGO. There are no families. There are no children in this group. Some of them, you can see, have ankle monitors on; that is what’s known as ‘ATD: Alternatives to Detention.’"

Ingraham: "So where are all of these illegals going? The real question might be, where they aren’t going."

Reporter: "Where are you going?"

Ingraham: "It’s wherever they want to go, that’s the answer. So, presumably, many unvaxxed illegals can just get free rides to wherever they please, but unvaxxed truckers can’t cross the border? Now of course, logic, consistency, they've never been a strong suit in the Biden Administration and they don’t really care, as Jen Psaki made clear earlier today."

Jen Psaki: "Migrants who cannot be expelled under Title 42 are placed into immigration proceedings and one of those avenues could be placement in an alternative to detention program in the interior of the United States."

Peter Doocy: "Just between March and August, which is a very small sample size, DHS says more than 47,000 of these migrants that were given notices to report did not show up, so why let them into the U.S. unsupervised in the first place?"

Psaki: "Well again, we have stringent protocols and processes that we implement here."

Ingraham: "Here now is Arkansas Sen. Tom Cotton to react to all of this. Senator, I think of what we’ve done to our children over the past two years, what we still do to our children. We are separating them if they're not masked or maybe even vaxxed down the road, in their separate areas. But people can just walk across our border, unvaxxed, and then get shipped basically wherever they want on the taxpayers dime, to just obviously take a job for less wages than, you know, traditional Americans would get. How do we stop this?"

Cotton: "Yeah, Laura, it’s criminally negligent. You have Democrats across the country who are still trying to shut down schools, who are insisting that kindergarteners wear masks, sending them home if they don’t. Meanwhile, your tax dollars are supporting single, grown men crossing this border and being shipped wherever they want to go, as we just saw in that video. That’s a far cry from what the federal courts have ordered the Biden Administration to do, which is to reimplement President Trump’s ‘Remain in Mexico’ policy.

"I was shocked by the Biden Administration’s response to it. They said that they sometimes help with the orderly processing to return, or to get these migrants to their final destination. Well, Laura, when someone crosses our border illegally, their final destination should always be turning them around and sending them back to their home country. They shouldn’t be putting them on a bus or an airplane at taxpayer expense to go wherever they want in the United States."

Ingraham: "And to your point, Senator, according to this DHS data that we have, this is from December -- the numbers of those who are actually sent back were very, very low, just a few hundred, so doesn’t this mean that they’re defying what the court said about remain in Mexico and they’re actually not doing that?"

Cotton: "I don’t see how you could reach any other conclusion, Laura. When you see that video of single, grown men -- these are not little kids that were sent here with human traffickers, these are not pregnant women, these are not frail, older people. These are single, adult men who are plainly coming here, not because of violence in their home country, to escape persecution, but because they want to get a better job, a job that an American citizen could be doing. That’s in direct violation of the court’s order -- one of the reasons we know this is the Biden Administration had to respond and provide this information to the court. I hope the court holds them accountable. I hope they hold Secretary of DHS [Alejandro] Mayorkas accountable for this."