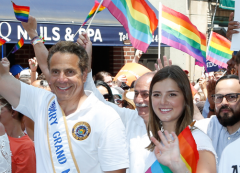 Twenty-three-year-old Michaela Kennedy Cuomo, daughter of Kerry Kennedy and Gov. Andrew Cuomo (divorced in 2005), has labeled herself as “demisexual” but has also said that “trying to label ourselves only limits us.”

In an Instagram Live conversation with author and speaker Donato Tramuto, Michaela said, “When I was in elementary school, I feared that I was lesbian. When I was in middle school, I came out to my family and close friends as bisexual. When I was in high school, I discovered pansexuality and thought, ‘That’s the flag for me.’”

She added, “I’ve recently learned more about demisexuality and have believed that that identity resonates with me most.”

The term “demisexual,” according to the PFLAG National Glossary of Terms, is: “Used to describe an individual who experiences sexual attraction only after forming an emotional connection.”

“I think we’re all evolving and growing, and trying to label ourselves only limits us,” Michaela said.

In early June, Michaela announced her “queer identity” in a lengthy post on Instagram (@michaelakennedycuomo). She urged her followers to reject the “socially constructed boxes” and “emerge from the closet.”

Michaela said in a world where people are “labeled straight until we prove we’re not,” she believes that, “Not just existing as me, but fully embracing my true self is a revolutionary act of resistance.”

She told Tramuto that she dreams of a world in which no one will be “coming out” because everyone’s sexual preferences and gender identities will be “assumed fluid and none of our business.”