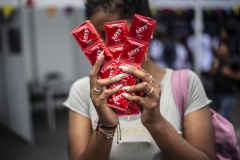 Public school students in 5th grade and up will have access to free condoms when they return in the fall, according to the Chicago Public Schools (CPs). The typical fifth-grader is 10 to 11 years old.

“Schools that teach grade 5 and up must maintain a condom availability program” in order to “mitigate the spread of sexually transmitted diseases, including HIV infection, and unintended pregnancy among CPS students,” the CPS website states under “Sexual and Reproductive Health Services.”

A mere 12 out of the 638 Chicago schools are exempt from the new policy, as they only enroll students that are younger than fifth grade.

Kenneth Fox is the Chief Health Officer for CPS, and he is confident that this new policy is beneficial for the students.

“Young people have the right to accurate and clear information to make healthy decisions,” Fox told the Chicago Sun-Times. “And they need access to resources to protect their health and the health of others as they act on those decisions.”

When asked why fifth grade is the starting point for condom provision, Fox only said the decision was “informed by a developmental understanding of children.”

“Essentially what we want to do is make condoms available to students for if and when they think they need them,” he said. “ … When you don’t have those protections and don’t make those resources available, then bad stuff happens to young people. You have elevated risks of sexually transmitted infections, of unintended pregnancies, and that’s very preventable stuff.”

Scout Bratt, an outreach and education director at the Chicago Women’s Health Center and advisor for the policy, said she wants students to come to the schools for condoms, and that this is a way in which the schools are “investing in young people’s health.”

Bratt also claims that supplying condoms will not encourage more students to have sex, rather it will provide easy protection for those who are already making those decisions.

Some parents, however, are not pleased with the new policy.

Maria Serrano is the mother of a sophomore in the CPS, and she criticized the schools for “doing things backwards” by supplying condoms to kids before they have received sufficient sexual education.

"My question is, 'Oh my God, how is it that CPS wants to give condoms to kids?'" Serrano told the Sun-Times. "They are 10 years old, 11, 12. They are kids. So why is CPS thinking about providing condoms? Why not provide them information, and at the end give them the resource of a condom when they are prepared to use those resources they want to provide. For me, this isn't the best option. They are doing things backwards."

Serrano said the CPS has largely failed to inform parents about this new policy, and she only learned of it through her work with Healing to Action, a grassroots organization that advocates for improved sexual education and resources in schools.

The condoms will be placed in easily accessible locations that also provide privacy for the students who choose to use them.

In Illinois, students 12 years of age or older can apparently use the school’s condom supply without the consent or permission of a parent or guardian, and the school is not permitted to inform the caregivers of their child’s use of the condoms.