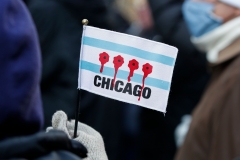 During the weekend in Chicago, 77 people were shot, five fatally. At least seven of the surviving victims are reportedly 17 years old or younger, according to CBS Chicago.

Late on Sunday afternoon, two 17-year-old boys were in an alley behind the 3200 block of West 15th Street in Lawndale when a vehicle pulled up and two offenders with guns got out of the car, according to CBS Chicago.

One boy was shot in the abdomen and right leg and the other sustained shots in the left shoulder and neck. They were both taken to Mount Sinai Hospital in critical condition.

In a Sunday night mass shooting in South Shore on 71st Street near Clyde Avenue, five people were shot, one fatally.

The police said one woman and four men were standing outside when a medium sized black vehicle drove by and a passenger inside the car shot them all.

The woman was shot six times and rushed to the University of Chicago Medical Center in critical condition where she was later pronounced dead.

The other victims who were shot were taken to the U of C Medical Center and Jackson Park Hospital and are in stable condition.

Four people were shot and one was killed in a Saturday morning shooting in the Northwest Side’s Pulaski Park neighborhood, reported CBS Chicago.

Around 5:30 a.m., four men got into an argument with an unknown man who shot at them, said the news outlet. All four men received gunshot wounds, and while three were stabilized, one was pronounced dead at AMITA Health St. Francis Hospital in Evanston.

No one is in custody, and Area Five detectives are investigating.

Most of the other shooting victims this weekend were shot alone or alongside one other person.