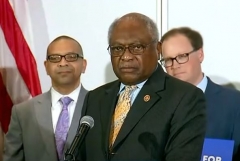 (CNS News)- Speaking on CNN’s “New Day” on Thursday House Majority Whip Rep. James Clyburn (D-S.C.) said he is “absolutely concerned” that the 2022 midterm elections will not be legitimate if the Democrats’ voting rights bills are not passed.

“I'm absolutely concerned about that,” Clyburn responded, calling for passage of a bill that would require states to prove any proposed changes to their voting laws are not discriminatory and obtain the federal government’s approval to make the changes:

“Let me remind the audience that, in 1965 at the time of the advent of the Voting Rights act, only three percent of African Americans in Alabama were registered to vote. We come in with the 1965 voting rights act and look what we have now. Nine years ago, the Supreme Court took direct aim at that act in Shelby v. Holder and got rid of preclearance.

“Now what preclearence means – I want people to understand: it means that if you change your voting laws and you've got a history of discriminating against black people or other minorities, you have to submit those changes to the Justice Department or to a federal court and explain why they are not discriminatory. And if they're not discriminatory, then you go ahead and do it. So, that's what we're doing here. We know the history of Alabama. We know the history of Georgia, Florida, Texas, South Carolina, North Carolina. We know that history. And so, they are now making these changes. And one change is: if you give somebody a drink water standing in line, it's a felony."

“That is crazy. So how could it be a legitimate election if you've got those kinds of things hanging over you?” Clyburn said. “And so that's what we're trying to do here: put some federal oversight, so when people make these kinds of felonious accusations at the voting booth, you can do something about it or at least prevent it.”

In his news conference on Wednesday, President Biden questioned whether the 2022 midterm elections will be legitimate: “I'm not saying it is going to be legit. The increase and prospect of being illegitimate is a direct proportion of not been able to get these reforms passed.”

The voting rights bill was rejected in the Senate on Wednesday in a 49-51 vote.