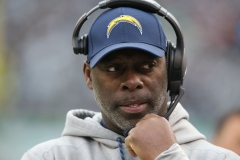 (CNSNews.com)- Speaking on “The Zach Gelb Show” on CBS Sports Radio Friday, Los Angeles Chargers Head Coach Anthony Lynn said the NFL’s new proposal to incentivize hiring of minority head coaches and general managers was conceived “out of desperation,” and that “you can’t make people hire someone they don’t want to hire.”

“I think, sometimes, you can do the wrong thing while trying to do the right thing, if that makes sense at all,” Lynn said, adding that the NFL is desperate to ensure qualified minority candidates are hired:

“Sometimes you can do the wrong thing while trying to do the right thing." -#Chargers coach Anthony Lynn on the latest proposal for incentivizing hiring minority coaches/executives through better draft picks.

You can’t say it any better in my opinion.pic.twitter.com/XsmyMuEr3t

“I think that there are a lot of qualified African-American coaches right now that could be a head coach in this league, and I just pray that we do our due diligence and give these guys an opportunity.

“Why did I get an opportunity? We can talk about that all day. Trust me when I tell you that. But there are lots of qualified applicants and they need an opportunity, and I think this is out of desperation, this is something that they’re throwing out there, but it is what it is.”

Asked what can be done to improve the hiring process, Lynn suggested improving networking opportunities and hiring head coaches from a wider range of coaching positions:

"But, sometimes, we hire people that we have something in common with, someone that looks like us, someone that came from the same background as I did. You’re more comfortable doing that. You know, I sort of get comfortable by the backgrounds that some of the owners came from. So, I was fortunate to get my opportunity with the Spanos, you know we just connected, and I knew. In our interview, we connected.”

“I just think also, we can open it up to more people. We’re stuck in this ‘got to be a coordinator.’ And I understand the progression of becoming a head coach, but I really believe some of our natural leaders are assistant coaches, assistant head coaches.

“We tend to not go there, but I believe that becoming a head coach has nothing to do with becoming a coordinator. I think those are two different skill sets. Being a leader of a franchise and calling plays.

"There are a lot of brilliant guys that can plays but can’t lead a damn team. And so, I just think if we open up the pool, more minorities will have opportunities, and I think our chances will be better of becoming head coaches. That’s just my opinion.”

Gelb then asked Lynn if he thinks he was ever passed up passed up for a job because of the color of his skin. Lynn said that even white coaches sometimes feel they were passed over for a job they were the most qualified candidate for. But, when that happens to him, it just inspires him to perform even better at his current job, Lynn said:

"I mean there were some times when I felt - I mean, I interviewed for six head coaching jobs. The Chargers were my sixth. And there were some times where I felt like - I see some guys getting opportunities before me that - it just motivated me, it just inspired me to be even better at what I was doing, because I felt like I was ready before them, but - I mean I think anybody can say that. I think white coaches can say that. It worked out the way it was supposed to for me. That’s all I can say.”

In the future, a team’s fourth round pick would climb five slots if that coach or general manager was in their third year with the team.

Twenty-four votes out of the 32 owners are needed to pass this rule.

The NFL currently has the “Rooney Rule,” which requires every team filling a head coaching or front office vacancy to interview at least one minority candidate.

Update: The NFL owners tabled the proposal to give teams draft incentives for hiring minority candidates at their virtual league meeting on Tuesday.