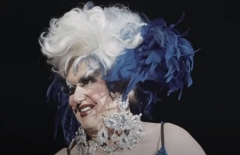 Walter Cole, aka “Darcelle,” says that not even the coronavirus and Black Lives Matter riots in his city can force his Darcelle XV Showplace theater to close after 53 years in business – thanks to the coronavirus relief loan he got from the government.

“We’ll never close,” Cole, thought to be the world’s oldest drag queen, told The Oregonian on Thursday, responding to local news reports that his Portland, Oregon theater might have to shut its doors:

“At 89, Cole is known for being the world’s oldest drag queen. Despite his age, he’s told his staff they’re going to continue performing and stay open for another 53 years.”

The coronavirus pandemic, riots, and “homeless people spreading around the city” have scared away customers, Cole says in the interview:

“The coronavirus pandemic and protests in the wake of the death of George Floyd brought business to a screeching halt in downtown Portland, Darcelle XV Showplace included. Cole said people were afraid to come downtown anymore due to the state of the streets and buildings after riots and homeless people spreading out around the city.”

But, thanks to the federal pandemic relief loan, Cole says he’ll be able to continue to pay his staff, which has been cut by nearly two-thirds, and keep his nightly drag show going.