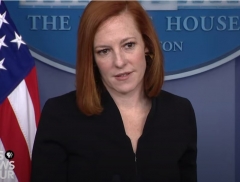 “So, included in these packages that the president is fighting to move forward on with leadership, we are working to lower the excruciatingly high cost of prescription drugs, which, by the way, over 80 percent of the American public supports.”

“We’re also working to make historic investments in crumbling roads and bridges, which over 80 percent of Americans support.”

But, results of a survey of voters released Monday by Rasmussen Reports reveals that little more than a third of the nation’s voters actually support the massive spending bill.

Just 36% of voters support passage of the contentious $3.5 trillion spending bill being debated in Congress, while 53% oppose the bill, including 41% who “strongly oppose” it. Ten percent say they aren’t sure how they feel.

“Congress is currently deadlocked over a $3.5 trillion spending bill. Do you support or oppose passage of this bill?” the survey of 1,000 likely voters, conducted September 23 and 26, 2021, asked. The survey has a margin of sampling error of +/- 3 percentage points with a 95% level of confidence.