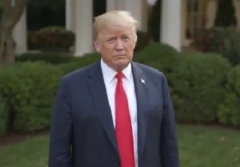 Late Friday afternoon, hours after President Donald Trump announced he had tested positive for coronavirus, White House Press Secretary Kayleigh McEnany posted an update on the president's health and treatment, revealing that Trump has received a dose of a drug still in the testing phase.

“As of this afternoon the president remains fatigued but in good spirits,” the update reports.

As CNN reported on Tuesday, two days before Trump’s announcement that he had tested positive for coronavirus, preliminary test results of Regeneron’s antibody cocktail released earlier that day suggest it reduces both levels and symptoms of the coronavirus. The desired effect of Regeneron’s cocktail is “to trap and shut down viral replication,” CNN reports in its overview of the drug:

Regeneron is petitioning the U.S. Food and Drug Administration to grant an emergency authorization of its cocktail.