Even a Washington Post fact-checker is calling out a claim by the official White House Twitter account that “there was no vaccine available” when President Joe Biden took office.

“Who’s manning the @WhiteHouse Twitter account? Delete this false tweet. Biden himself has said 8% of seniors had gotten the vaccine on the day he took office. Biden was one of them,” Washington Post fact-checker Glenn Kessler tweeted Thursday, responding to the following White House post:

“When President Biden took office, millions were unemployed and there was no vaccine available. In the last 15 months, the economy has created 8.3M jobs and the unemployment rate stands at 3.6% — the fastest decline in unemployment to start a President's term ever recorded.”

In fact, President-Elect Biden received the first of two shots of the Pfizer-BioNTech COVID-19 vaccine at ChristianaCare Hospital on December 21, 2020 – in a televised event.

Biden even credited the Trump Administration, on-air, for getting the vaccine to the American people:

“I think that the Administration deserves some credit for getting this off the ground, Operation Warp Speed.”

And yet, despite Twitter’s claim that it does not allow misinformation about COVID to be posted on its platform, the White House’s false post remains up, without added “context,” as of noon on Friday. As Fox News explains:

“Twitter, which has taken steps to prevent misinformation on the platform, claims in its guidelines that users ‘may not use Twitter’s services to share false or misleading information about COVID-19 which may lead to harm.’

“The policy goes on to state that content related to COVID-19 is considered in violation if it’s ‘demonstrably false or misleading, based on widely available, authoritative sources.’ The social media juggernaut then explains that these type of violations could force users to become locked out of their account until the tweet is deleted, and a permanent suspension could be handed to repeat offenders.” 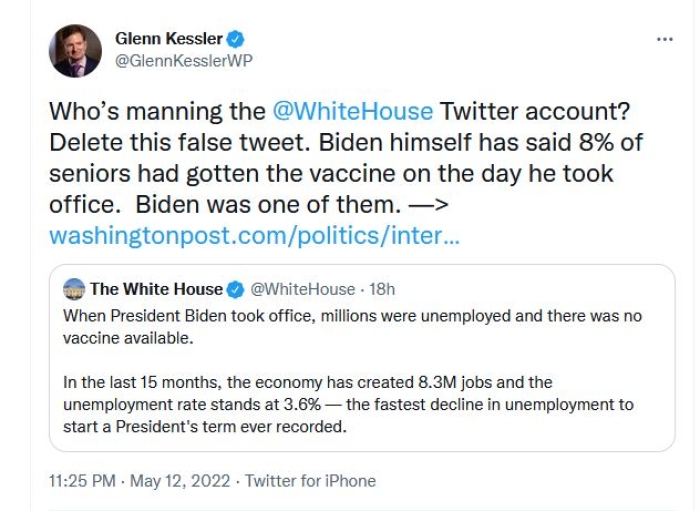