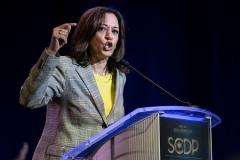 “We have to address the root causes of migration,” Vice President Kamala Harris said Wednesday, after President Joe Biden put her in charge of dealing with the crisis at the U.S. southwest border.

Harris made the vague pronouncement Wednesday night, tweeting that the task “won’t be easy”:

“.@POTUS asked me to lead our diplomatic work with Mexico, El Salvador, Guatemala, and Honduras. To address the situation at the southern border, we have to address the root causes of migration. It won’t be easy work—but it's necessary.”

Both The Wall Street Journal and USA Today report that Harris also made the claim while speaking with reporters at the White House earlier in the day – without specifying the “root causes”:

"While we are clear that people should not come to the border now, we also understand that we will enforce the law, and that we also, because we can chew gum and walk at the same time, must address the root causes that cause people to make the trek."

Politico reports that administration officials also told reporters that Harris will focus on “the root causes of immigration,” with no mention of what those might be:

Harris’ main focus, a senior administration official told reporters earlier Wednesday, will be two-pronged: working to slow the flow of “irregular migrants” by addressing “the root causes” that prompt them to leave their home countries as well as strengthening relationships with Mexico and the Northern Triangle countries where the bulk of the migrants arriving at the U.S. border come from.

On the call with reporters, aides made clear that Harris would not be owning the entire immigration portfolio for the administration and would be instead focused on long-term efforts in Central America.

“[Harris] is going to be focused on overseeing our diplomatic efforts, working closely with these nations to look at the issues of migration and their own enforcement on their own borders," the senior administration official said. "More broadly, though, she's going to be working to implement a long-term strategy that gets at the root causes of migration.”

Pres. Biden alluded to "many factors as to why people leave in the first place," when he handed the immigration problem over to Harris at Wednesday’s press conference. He said that, back when he was vice president, he thought that the reasons “so many people” were coming to the U.S. included gang violence, trafficking by cartels, and natural disasters.