Va. Lt. Gov.-Elect Winsome Sears: ‘I Love this Country So Much, I’m Willing to Die Protecting It. U-S-A!!’ 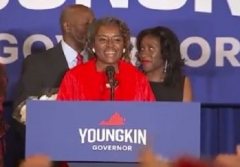 “I love this country so much, I’m willing to die protecting it,” Republican Virginia Lt. Gov.-Elect Winsome Sears, a Jamaican-born Marine Corps veteran, said Wednesday, introducing a Twitter video, in which she declares her love for America and leads a crowd in chanting “U-S-A!”

“Let me tell you this: I am not even first-generation American. When I joined the Marine Corps, I was still a Jamaican. But, this country had done so much for me I was willing – willing – to die for this country.

On Tuesday, Sears won the race for Virginia's Lt. Governor, becoming the first Black woman elected statewide in the Commonwealth.

I love this country so much, I’m willing to die protecting it. U-S-A!! 🇺🇸 pic.twitter.com/BYHiGdxjy1