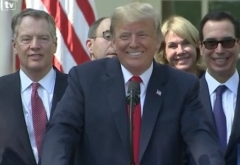 At 52%, Pres. Trump’s job approval is up from Wednesday’s 49% level. The last time a majority of voters approved of Trump’s performance was nearly a month earlier, when it hit 52% on September 25.

Thursday’s 52% showing includes 41% who say they “strongly” approve of the job Trump’s doing. Another 43% say they strongly disapprove, leaving Trump still in negative territory among the nation’s most passionate voters.

One in four (26%) of Democrats and nearly nine in ten (85%) voiced approval, Rasmussen reported on Thursday.

While 53% of White voters voiced approval, Black voters registered 37% approval and 58% of those of other races gave the president a positive rating.