Trump Urges Herschel Walker to Run for Georgia Senate: ‘He Would Be Unstoppable,’ Just Like He Was as a Running Back 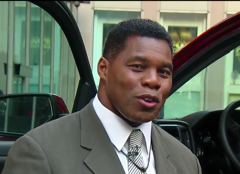 Former President Donald Trump wants Herschel Walker to run for the Senate in the state where Walker won a Heisman Trophy playing for the Georgia Bulldogs in college.

Trump said Walker would be just as unstoppable as a candidate as he was as a star running back at Georgia and for the NFL’s Dallas Cowboys, The Washington Times reported Wednesday:

“Wouldn’t it be fantastic if the legendary Herschel Walker ran for the United States Senate in Georgia?” Mr. Trump said in a press release that sounded like his tweets of old. “He would be unstoppable, just like he was when he played for the Georgia Bulldogs, and in the NFL. He is also a GREAT person. Run Herschel, run!”

Trump and Walker have been friends and mutual supporters ever since 1983 when Walker played for Trump’s team in the now-defunct United States Football League. Walker has long been a vocal supporter of Trump’s political policies, often voicing his praise on social media.

Walker’s last tweet is a video commentary posted on February 19 of this year, in which he declared his opposition to reparations as a means to help the African-American community. Instead of reparations, politicians should focus on providing jobs to African Americans, Walker says.

Our Elected Officials time is best served upholding the Constitution and finding solutions to hold Companies & our Government accountable. They want to keep everyone emotional with bandaids rather then solving problems! #Many folksmakemoneyoffofcreatingraceproblems pic.twitter.com/4hyDTfa97a

Walker's comments are transcribed below:

“Well, I want to thank my Lord and Savior Jesus Christ for yesterday, today and tomorrow.

“Because, what they’re trying to do right now is point the finger somewhere.

“Well, let me help you out with something. H.R. 40 is not about giving out anything to anybody. It’s a fact-finding mission, a fact-finding mission that I don’t think ought to be done. And, it’s weird because the fact-finding mission is going to pay people to find out if reparations should be given to who: who’s black enough, who’s from descendants of slaves…who is whatever. Well, they can’t do it – but, they are going to want to receive a lot of money.

“So, this is one of those slippery hands. While they got you worried about whether Herschel Walker is going to give you reparations, they’re passing a bill to pay some group of their choosing to make a lot of money, to do a fact-finding mission, whether reparations should be given.

“Because, the Constitution of the United States, when they came to office, that’s what they should have fought for, is to give every man his freedom and his rights. Well, they didn’t do that.

“So, the H.R. 40 is for them to check themselves – sort of like hiring a fox to guard a hen house, then when the hens come up missing, you pay the fox to give you information on where did the hens go. Think about it.”