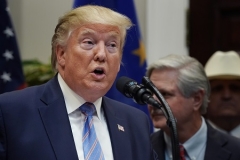 In a statement released Wednesday after the Facebook Oversight Board ruled that the social media giant could continue its “lifetime” ban of his Facebook and (Facebook-owned) Instagram accounts, former President Donald Trump issued a statement, saying “These corrupt social media companies must pay a political price.”

“Radical Left Lunatics are afraid of the truth, but the truth will come out anyway,” Trump promised in the statement released through his Save America leadership PAC, in which he warns of the threat of social media censorship to the nation’s electoral process:

“What Facebook, Twitter, and Google have done is a total disgrace and an embarrassment to our Country. Free Speech has been taken away from the President of the United States because the Radical Left Lunatics are afraid of the truth, but the truth will come out anyway, bigger and stronger than ever before. The People of our Country will not stand for it! These corrupt social media companies must pay a political price, and must never again be allowed to destroy and decimate our Electoral Process.”

Wednesday, Facebook’s Oversight board announced that it will allow the “permanent” ban of Trump’s Facebook and Instagram accounts to continue - temporarily – giving Facebook a six-month deadline to craft more clear and consistent standards to justify such bans.

This week, Trump launched his own webpage, “From the Desk of Donald J. Trump,” to voice his opinions regarding important, national issues.