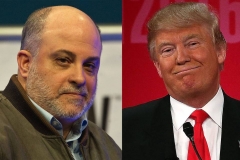 Former President Donald Trump is praising Constitutional Scholar and Author Mark Levin’s new book, “American Marxism,” for pulling the veil off the Marxist ideology being deceptively peddled in the U.S. - not just by Democrats and the Biden Administration - but by schools, media, corporations and entertainment.

“Mark is a great patriot who loves his Country,” Trump says in a statement issued Wednesday. “American Marxism” explains how Marxist principles are being “cloaked in deceptive labels like ‘progressivism,’ ‘democratic socialism,’ ‘social activism,’ and more,” Trump says:

Congratulations to Mark Levin on the release of his great new book, American Marxism, now available and doing really well. Mark is an American Patriot who loves his Country. In American Marxism, Levin explains how the core elements of Marxist ideology are now pervasive in American society and culture—from our schools, the press, and corporations, to Hollywood, the Democratic Party, and the Biden presidency—and how it is often cloaked in deceptive labels like “progressivism,” “democratic socialism,” “social activism,” and more. Get your copy today—Save America!

Last week, in an exclusive interview discussing his book with Media Research Center President Brent Bozell, Levin explained how the Biden Administration’s policies, on everything from immigration and Critical Race Theory to climate change and transgenderism, are deeply rooted in Marxism:

“This stuff wasn’t just developed today - this stuff comes straight out of Marx and Engels. It is Americanized, it is altered. It may not be technically, exactly the same thing. But, fundamentally, it is.”