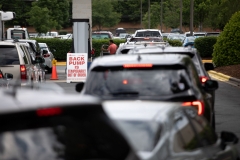 With traffic backed up on streets across the nation with cars waiting to get into gas stations due to a cyberattack that shut down the Colonial Pipeline, former President Donald Trump issued a statement denouncing the Biden Administration’s energy initiatives.

“Did Joe Biden put Hunter in charge of our energy?” Trump asks, referring to a scandal involving potential conflicts of interest arising from Hunter Biden's lucrative position on the board of Burisma, a Ukrainian energy company with a reputation for corruption, while Joe Biden was vice president and the Obama administration’s point man on Ukraine policy:

“If there were long and horrible gas lines like this under President Trump, the Fake News would make it a national outrage! Did Joe Biden put Hunter in charge of our energy, with all of his Burisma experience?”

On Tuesday, discussing the fuel shortage crisis, a reporter asked Sec. Granholm about the "feasibility of using rail cars to transport fuel into the affected areas."

Despite Pres. Biden’s cancellation of the Keystone Pipeline and anti-fossil fuel policies, Energy Sec. Granholm conceded that “the pipe is the best way to go.”:

“So, this particular area of the country there--this is why we have doubled down on ensuring that there's an ability to truck oil in, gas in. But it's--it's--the pipe is the best way to go. And so that's why hopefully this company, Colonial, will in fact be able to restore operations by the end of the week, as they have said.”

On Wednesday, Colonial Pipeline announced that it has begun restarting its fuel-delivery operations, but that it will take several days to return to full capacity.