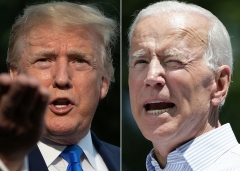 “The Democrats want to own this day of January 6th so they can stoke fears and divide America,” former President Donald Trump said Thursday, reacting to President Joe Biden’s divisive speech attacking Trump and Republicans on the one-year anniversary of the riot at the U.S. Capitol.

“I say, let them have it because America sees through theirs lies and polarizations,” Trump added, in a statement released following Biden’s speech.

“This political theater is all just a distraction for the fact Biden has completely and totally failed,” Trump said, citing the out-of-control border crisis, rampant inflation, the loss of energy independence and the embarrassing troop withdrawal from Afghanistan.

“Everything he touches turns to failure,” Trump said, in a separate email reported by American Military News:

“Trump said Biden is “working hard to try and deflect the incompetent job he is doing, and has done, on the horrible Afghanistan withdrawal (surrender), the Borders, COVID, Inflation, loss of Energy Independence, and much more.”

“’Everything he touches turns to failure. That’s what you get when you have a rigged Election,’ Trump concluded.”

As CNSNews.com reports, Biden used his speech to disparage, not just Trump, but also his fellow Republicans – and to call for passage of Democrats’ bill to weaken the ability of states to ensure election integrity:

“Biden made numerous references to ‘the former president,’ blaming him for rallying the mob to attack the Capitol; mocking him as ‘not just a former president but a defeated former president’ who lost by 7 million votes; and saying Trump's ‘bruised ego matters more to him than our democracy or our Constitution.’

“Biden did not spare Trump's ‘followers’ or even Republicans: He said ‘too many’ Republicans are ‘transforming the party’ by supporting ‘a single man.’ ‘They seem no longer to want to be the Party of Lincoln, Eisenhower, Reagan, the Bushes,’ Biden said.”