Trump on Biden’s Stair Stumble: ‘I Expected It;’ That ‘Was the Last Thing I Wanted’ on Icy West Point Ramp 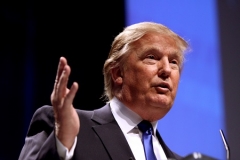 Former President Donald Trump said he expected President Joe Biden to take the type of tumble he did last Friday on stairs boarding Air Force One.

“I expected it,” Trump said in an interview Monday with Newsmax TV, when he was asked if he was shocked when Biden fell three times on the stairs while boarding the plane:

Newsmax TV: “You saw him take that terrible tumble on Friday. I was surprised he went down not once, not twice, but three times. Almost no mention of it yesterday on the Sunday shows. I know that they gave you a hard time once, when you walked a little bit slowly.

“Were you as shocked as I was? Or, maybe you weren’t. Maybe, you expected something like that to happen.”

Trump recalled how media attacked him last year, when he carefully and slowly descended an icy ramp at West Point. “The last thing I wanted was to take a tumble, like Biden did,” Trump said, noting that the “lamestream media” virtually ignored the news when Biden actually did fall:

“When I went down the ramp at West Point – which was like a sheet of ice with no railing, no nothing, great planning – I wanted to go inch by inch, because the last thing I wanted was to take a tumble, like Biden did.

“It’s like, the whole thing is incredible. There’s no such no longer freedom of the press.”