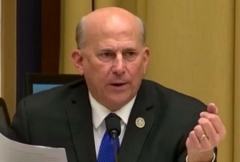 “We have all that we need – except leadership,” Texas Rep. Louie Gohmert (R) said Friday, explaining why his energy-rich state has suffered widespread power outages this week, leaving citizens freezing during a brutal cold spell.

Texas officials knew they needed to winterize the state’s power plants in preparation for severe cold. But, instead, they chose to spend Texas’ financial resources on developing less-reliable energy sources that couldn’t stand up to severe weather, Rep. Gohmert told Fox and Friends First:

“Over a decade ago, we had a federal report that said we needed to winterize our plants.

“Well, instead of focusing money on winterizing plants and preparing for this time, they spent that money developing new solar and wind energy. And, of course, in a time like this, those are not reliable.

“You have to have that transmission from actual electric-generating plants. Our natural gas plants – none of them have gone offline. But, because there was so much gas shut in, valves have frozen and they had trouble getting more of that out.”

“It was a total breakdown in preparation” due to faulty leadership, not a lack of energy, Rep. Gohmert said:

“So, it was a total breakdown in preparation.

“We have all that we need – except leadership. And, that’s where things broke down.

“This was a once in a once-in-a-hundred-years storm. I’ve never seen these kind on temperatures in my whole life, living in East Texas.

“But, we should have been prepared. And, I think we’re going to be getting answers in the near future.”