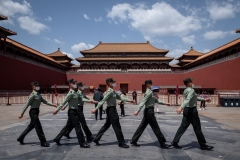 Anti-China sentiment is growing in the U.S., as more Americans now view China as “a major threat” and an “enemy” and say they won’t buy products from China, recent national surveys reveal.

On Wednesday, Politico published the results of its poll finding that, in 2020, the percentage of U.S. voters deeming China an enemy has risen, while the percent calling it an ally has dipped:

Likewise, Pew Research Center findings published last month on April 21 show that about two-thirds (66%) of adults in the U.S. had a negative view of China, while only about a quarter (26%) reported a favorable view:

“Negative views of China have continued to grow, according to a new Pew Research Center survey of Americans conducted in March. Roughly two-thirds now say they have an unfavorable view of China, the most negative rating for the country since the Center began asking the question in 2005, and up nearly 20 percentage points since the start of the Trump administration.”

The Pew survey also found that 62% called “China’s power & influence a major threat,” an increase of 14 percentage since 2018.

A May 12-14, 2020 survey by FTI Consulting found that more than half (55%) of Americans considered China an untrustworthy trade partner and 40% won’t buy products from there, Bloomberg reported last Sunday:

“Some 40% of Americans said they won’t buy products from China, according to a survey of 1,012 adults conducted May 12-14 by Washington-based FTI Consulting, a business advisory firm. That compares with 22% who say they won’t buy from India, 17% who refuse to purchase from Mexico and 12% who boycott goods from Europe.”

“55% don’t think China can be trusted to follow through on its trade-deal commitments signed in January to buy more U.S. products.”

Additionally, about three-fourths (78%) said they’d be willing to pay more for products if the manufacturer relocated out of China, the survey found.