Results of a new, national survey of more than ten thousand U.S. adults released by Pew Research on Tuesday reveal that support for the Black Lives Matter (BLM) movement has waned over the last three months. 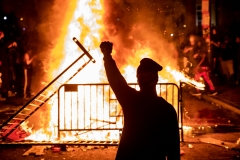 According to the survey, conducted September 8-12, 2020, both strong support and general support for BLM has dropped, compared to results from a similar survey conducted June 4-10 of this year, Pew reports:

“A majority of U.S. adults (55%) now express at least some support for the movement, down from 67% in June amid nationwide demonstrations sparked by the death of George Floyd. The share who say they strongly support the movement stands at 29%, down from 38% three months ago.”

Pew says the decline is most notable among White and Hispanic adults, with support among Whites falling from 60% to 45% and that of Hispanics dipping from 77% to 66%. The 87% support of Black adults was “virtually unchanged,” Pew reports.

In both surveys, Pew asked panelists to respond to the following question:

“From what you’ve read and heard, how do you feel about the Black Lives Matter movement?”