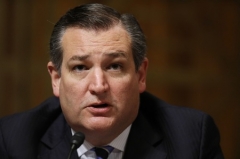 Cruz was sharing his interpretation of a Thursday tweet by Joe Biden, in which the president declared that “those at the top have been getting a free ride for far too long. I’m going to change that,” replying:

In reality, Pres. Biden’s comment was one of several posted on Twitter Thursday touting his plan to tax the “super-rich” in order to pay for a slew of new entitlements.

“You pay your share in taxes. It’s long past time the super-wealthy pay theirs as well,” Biden said in an earlier post.