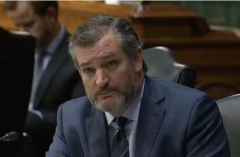 Senate Majority Leader Chuck Schumer (D-NY) knew what he was doing when he publicly told Supreme Court Justice Brett Kavanaugh that he had “unleashed the whirlwind” by his conservative votes, Sen. Ted Cruz (R-Texas) said Wednesday.

What’s more, Schumer’s party has become the party of mob violence, Cruz said in an appearance on “Hannity”:

“The Democratic Party today is the party of mob violence. They’re the party - Schumer knew what he was saying when he said, ‘You have unleashed the whirlwinds.’ He was unleashing the radicals.”

The reason the Supreme Court’s draft decision to overturn Roe v. Wade was leaked to the public before it was finalized was “to allow threats and bullying to come at the justices,” Cruz said:

“The reason the decision was leashed was to allow threats and bullying to come at the justices.

“Listen, a week ago we saw a Supreme Court justice, Justice Brett Kavanaugh, threatened, and a man arrested for attempted murder.

“Why? Because the left-wing radicals knew where his home was – and the White House was encouraging those radicals to go to his home, where they were threatening his children.”

Left-wing radicals aren’t just violating federal law by protesting at Kavanaugh’s house – they’re actually willing to commit an insurrection and kill a Supreme Court justice in order to get what they want, Sen. Cruz said:

“Why do they want to murder that Supreme Court justice?

“Because they are willing to, essentially, commit a revolution – an ‘insurrection,’ to use their favorite term – against a branch of government, because they want to change the vote on a pending decision of the Supreme Court.

“It is shameless. And, it is also a violation of criminal law. The federal criminal law makes it a crime to go and protest at the home of a judge while he is considering a case.”

“Merrick Garland has become, perhaps, the most political attorney general in the history of this country,” Cruz said, noting that, while Garland has been willing to treat parents as domestic terrorists, he has refused to enforce the federal law protecting Supreme Court justices, like Kavanaugh.