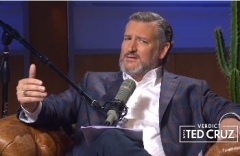 There are “5 facts about Trump Special Counsel Jack Smith” that Sen. Ted Cruz (R-Texas) wants his Twitter followers to know – and they don’t reflect well on Smith’s ability to impartially investigate the former president.

In a Sunday tweet, Cruz shared some information about Smith, the man appointed by President Joe Biden’s Attorney General Merrick Garland to investigate former President Donald Trump’s handling of classified documents and the transfer of power following the 2020 presidential election:

“2—Led debacle of a prosecution of Bob McDonnell, reversed 9-0 by SCOTUS

“3—Involved in the IRS targeting of conservatives

“4—Wife is a Biden donor

Embedded in the tweet is a video clip from Cruz’s “Verdict with Ted Cruz” podcast, in which Sen. Cruz expands on Special Counsel Smith’s dubious background and the reasons to distrust Smith’s investigation of Trump.

1—Picked by Garland
2—Led debacle of a prosecution of Bob McDonnell, reversed 9-0 by SCOTUS
3—Involved in the IRS targeting of conservatives
4—Wife is a Biden donor
5—Wife produced a Michelle Obama doc & anti-Citizens United film pic.twitter.com/GIZnLPcldW

In particular, Cruz takes aim at “Smith’s involvement, and significant involvement, in the cover-up of (then-IRS head) Lois Lerner and the IRS targeting of conservatives and refusal to prosecute it.”

“This is a prosecutor who Merrick Garland put in there for one purpose, and one purpose only, and that is to indict and to prosecute Donald Trump,” Cruz says:

“It is the weaponization of the Department of Justice. And I think it’s disgraceful.”

Sen. Cruz also delves into the partisan past of Smith’s wife:

“She was a producer of a documentary on Michelle Obama, entitled ‘The Coming.’”

“How many partisan Democrats do you know? Did any of them produce a movie that is a puff-piece on Obama? No.

“And, by the way, that’s not the only movie she produced. She also produced a movie called ‘Dark Money,’ which is an attack on Citizens United, an attack on free speech.”

On his social media platform, TruthSocial.com, Pres. Trump has agreed with Cruz’s assessment of Smith, accusing the special counsel appointee of being “a political hit man”:

“Jack Smith (nice, soft name, isn’t it?), is a political hit man, who is totally compromised, and shouldn’t be allowed anywhere near our already highly WEAPONIZED & CORRUPT ‘Justice’ Department and FBI, which are stuffed with, and listening to, Radical Left ‘MONSTERS,’ who will cause difficulties for our Country the likes of which we have not seen before. By the way, OBAMA SPIED ON MY CAMPAIGN (and got caught!), & what about the MASSIVE Joe & Hunter BIDEN CORRUPTION (Evidence already in!)?”

Partisanship isn’t the only concern, however.

As Fox News has reported, a special counsel appointment must be approved by the Senate and Smith’s wasn’t, calling into doubt the legality of the appointment itself:

“A principal officer requires appointment by the president and confirmation by the Senate, the same as other U.S. Attorneys. And Congress did not explicitly give the attorney general authority to appoint a chief prosecutor.”