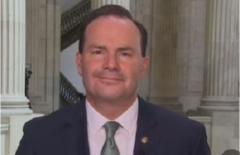 Only a limited number of people had access to the Supreme Court majority draft opinion that was leaked this week - and scrupulous, well-established protocols to prevent the leak had to be violated - Sen. Mike Lee (R-Utah), a former law clerk for Supreme Court Justice Samuel Alito, explained Tuesday.

The leak, which signals that the Court intends to overturn the Roe v. Wade decision legalizing abortion, is unprecedented. And, until the draft majority opinion was leaked on Monday, only a small circle of individuals, all within the Court, had ever known a Supreme Court decision, or draft opinion, before it was formally announced.

Appearing on “The Story with Martha McCallum,” Sen. Lee explained that draft opinions aren’t often printed and detailed the only individuals who had access to the leaked document:

After use, the printed copy of the draft opinion must then be turned into slurry, using a specific set of actions, Sen. Lee said:

“When they’re finished with them, they don’t just throw them in the waste basket – they put them in a burn-bag.

“They take the burn-bag and they shred it twice, vertically and horizontally, creating confetti.

“Then, after they shred it, they burn it and turn into slurry – all before it leaves the custody of the Supreme Court. So, these had all been violated, or overlooked, circumvented, perhaps deliberately, in order to release this. That's unfortunate.”

Sen. Lee agreed with Host Martha McCallum that it was the intention of the leaker to undermine the integrity of the Court and affect its decision by swaying the votes of Justices who are “on the fence” about their votes to overturn Roe v. Wade:

“That's right. Look, while I don't have first-hand knowledge of what happened, or why it did, one could surmise, as many have and I think reasonably, that this was quite possibly an effort by someone to threaten, harass, intimidate those Justices planning to sign on to the majority opinion.

“The fortunate part about this, though, is that the Supreme Court appears poised to correct a major slight, a major overreach by the court nearly fifty years ago,” Sen. Lee said. “That's good news for the American people, regardless of how they feel about this issue as a policy matter.”