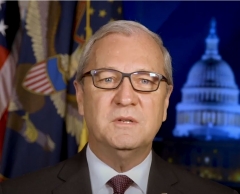 “Welcome to the stupidest week in the Senate,” Sen. Kevin Cramer said Tuesday at the beginning of the second Senate impeachment trial of former President Donald Trump:

Sen. Cramer blasted the impeachment trial in a video and in public statements posted to his website. In his first statement, he says House Speaker Rep. Nancy Pelosi (D-Calif.) is making a mockery of Congress, while preventing it from addressing the serious issues plaguing Americans today:

“Welcome to the stupidest week in the Senate. While Speaker Pelosi sent these backbenchers to tie up the Senate, she sent the rest of the House home instead of carrying on the actual work of the American people. Impeachment is not something we should use flippantly. As a response to her view that President Trump demeaned the office, the House Speaker is now making a mockery of Congress and one of the most serious institutions and processes in our country. It’s disgusting.”

The Constitution clearly shows that Democrats are misusing the impeachment process, Rep. Cramer says in a second statement:

“A plain reading of the Constitution makes it obvious what we began today is an inappropriate use of the impeachment process, and the vast majority of Republicans agree. We should stop this process right now.”