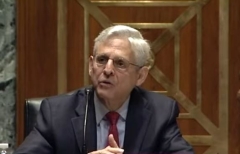 Using rampant killings in Chicago as an example, Sen. Kennedy pressed Garland on his failure to recommend a policy of “stop, question and frisk” to state and local law enforcement and officials:

“You’re one of the country’s chief law enforcement officials, maybe the chief, and what you say matter. And, suppose, here’s what I’m asking: let’s take Chicago, where you haven’t, we haven’t, made any inroads in stopping the killing.

“Chicago is now the world’s largest outdoor shooting range. We know that a lot of the shootings come from gangs.

“Why wouldn’t you want to call the police chief and the mayor in Chicago and say, ‘Look, you know who these gang members are. When you have reasonable suspicion, under Terry v. Ohio – an objective standard, more than just a hunch – why don’t you aggressively stop, question and frisk these gang members?’”

“Why won’t you do that?” Kennedy asked again.

Garland replied by saying the federal government doesn’t get involved in policing at the state and local levels:

“Um, the best way for the federal government to stop violent crime is to work at each local level and let the state and locals determine what the best use of their own resources is.”

“Judge, I’m sorry for interrupting you, but I’m trying to get some answers: why won’t you do that? Just tell me why you won’t do that. Your opinion matters,” Sen. Kennedy said.

Once again, Garland deferred to state and local decision-makers: