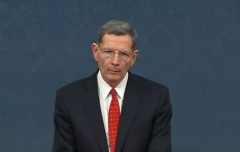 “With Democrats in charge in America, criminals have hit the jackpot,” Senator John Barrasso (R-WY) said Thursday in a Senate floor speech.

“Last year, the national murder rate reached its highest level in 25 years. So far, 2022 looks like it may be even worse,” Barrasso said.

“They’re doing two things: they’re making it worse and they’re trying to avoid being blamed for what they’re causing.”

“So, how are they making it worse? Well, just take a look at some of the nominees of President Joe Biden, people that he’s put in high positions in the Justice Department: radical liberals. Every Democrat member of the body of this institution voted to confirm them.

“These are people that hold beliefs way out of the mainstream of the American people, when it comes to their service for the Department of Justice. Joe Biden has, essentially, handed over the Justice Department leadership to radical activists who want to defund the police.“

“People in American are shocked to learn that, last March, Democrats on a straight party line vote – every Republican against, every Democrat for – gave almost a billion dollars in stimulus checks to 645,000 convicted criminals. These are people either still behind bars or recently released.“

“On District Attorney Bragg’s first day in office – first day – he told the whole world he would not prosecute certain crimes. He didn’t care if they were on the books or not, he wasn’t going to prosecute them.”

“The second thing Democrats are trying to do is to try to avoid getting blamed for this incredible spike in violent crime,” the senator said.