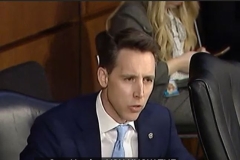 On Tuesday, a Democrat witness accused Sen. Josh Hawley (R-MO) of “violence” for asking if women are the “people with the capacity for pregnancy,” a claim Hawley says shows just how unhinged the Left has become.

“The Democrats say what they really think: men can get pregnant and if you disagree, you are ‘transphobic’ and responsible for violence,” Hawley tweeted following the Senate hearing, including video of his exchange with University of California at Berkeley law professor Khiara Bridges, a pro-abortion witness.

“According to today’s Democrat party, if you believe that only women get pregnant, you are a bigot and responsible for violence,” Hawley tweeted. “For today’s left, disagreement with them = violence. So you must not disagree.”

The Democrats say what they really think: men can get pregnant and if you disagree, you are “transphobic” and responsible for violence pic.twitter.com/44CeIi5WvT

In a statement provided to Fox News Digital, Hawley said the professor’s claims are evidence of how Democrats have become radicalized to the point that they’ve lost their minds:

“Hawley torched the Democrats in an exclusive statement to Fox News Digital, calling the party ‘extremists’ and saying the Democrats’ descent into madness is on display for the whole country.

"The Democrats have become such extremists. Now their official line is men can get pregnant — and if you disagree, you’re violent," Hawley said on Tuesday after the exchange went viral online. "They have lost their minds and the whole country can see it."

“No, I don’t think men can get pregnant,” Sen. Hawley told Prof. Bridges when she asked for his view on the subject, during the hearing.

In an interview with Fox News Channel's Sean Hannity, Sen. Hawley said that the belief that men can become pregnant has become the Democrats' "religion."

In the hearing, Prof. Bridges told Hawley that his question asking her to define her term “people with the capacity for pregnancy” actually “opens up trans people to violence by not recognizing them,” because of their high suicide rate.

But, as columnist Ben Shapiro explains in his commentary on the professor’s testimony, there’s no evidence that bigotry causes an increase in suicidal tendencies among LGBT people:

“Hawley was of course correct that only women can have babies; women who believe they are men are still women. And the notion that suicidal ideation rates among LGBT people are the result predominantly of societal bigotry is completely evidence-free; suicidal ideation rates among LGBT people remain massively higher than among cisgender heterosexual people in San Francisco just as they would in Alabama.”

And, National Review notes that, if referring to “women” is transphobic and incitement of “violence,” Prof. Bridges, herself, was guilty of doing just that in a 2020 law review article about pregnancy, where she used the term 349 times:

“But Bridges’ views on the subject presumably evolved recently, since in a 2020 law review article about pregnancy, the same professor used the word ‘woman’ 45 times and ‘women’ 349 times.

“Bridges’ testimony on Tuesday argues that failure to recognize the gender spectrum, even in sex-specific contexts, is ‘transphobic’ and incites ‘violence’ against transgender people, yet her own scholarship attributes pregnancy to women and fails to recognize ‘transgender’ and ‘non-binary’ people.”

A transcript of the exchange between Sen. Hawley and Prof. Bridges is provided below:

Sen. Hawley: “Professor Bridges … you’ve referred to ‘people with the capacity for pregnancy.’ Would that be women?”

Hawley: “So this isn’t really a women’s rights issue…”

Bridges: “We can recognize that this impacts women while all recognizing that it impacts other groups. Those things are not mutually exclusive, Senator Hawley.”

Hawley: “Your view is … is that the core of this right, then, is about what?”

Bridges: “I want to recognize that your line of questioning is transphobic and it opens up trans people to violence by not recognizing them.”

Hawley: “Wow, you’re saying I’m opening up people to violence by asking whether or not women are the folks who can have pregnancies?”

Bridges: “I want to note that one out of five transgender persons have attempted suicide.”

Hawley: “Because of my line of questioning? So we can’t talk about it?”

Bridges: “Because denying that trans people exist, and pretending that not to know that they exist…”

Hawley: “I’m denying that trans people exist by asking you if you’re talking about women having pregnancies?”

Bridges: “Do you believe that men can get pregnant?”

Hawley: “No, I don’t think men can get pregnant.”

Bridges: “So you are denying that trans people exist.”