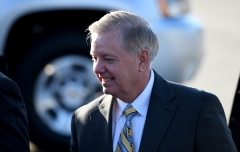 “Putin is playing the West like a fiddle,” Graham tweeted on Sunday night, following up on his post criticizing Western nations for sending the message to world that Russia, not the West, is in complete control:

“Instead of announcing crushing sanctions in detail as the President of Ukraine suggested, western powers are responding to Putin’s unending provocations making it unnervingly clear that Russia is in complete control of the outcome regarding Ukraine.”

“What happens in Ukraine will be a signal – for better or worse – to bad actors around the world,” Graham said in earlier posts, commenting on his meeting with U.S. President Boris Johnson:

“Great meeting with my good friend, Prime Minister @BorisJohnson who is one of the leading conservative voices in the world. The US-UK relationship remains foundational to our foreign policy and who we are as a people.”

“The Prime Minister is determined to make sure that the UK is in the camp of punishing Putin in the strongest possible way to ensure world order.

“We share the view that what happens in Ukraine will be a signal – for better or worse – to bad actors around the world.”

Sen. Graham also tweeted praise for a speech by Ukraine’s president asking Russian President Vladimir Putin to meet with him and explain what it would take to come to a peaceful, diplomatic solution. Graham reiterated that sanctions on Russia must be instituted pre-invasion, not afterwards:

“One of the most impressive speeches ever given at the #MSC, or anywhere, was given by President Zelensky of Ukraine. He laid out, in no uncertain terms, the price of appeasement and reaffirmed his nation’s determination to defend freedom.”

“I could not agree more with his assessment that we should put pre-invasion sanctions in place now so Putin can see for himself the consequences of his actions.

“Without clarity, Putin will assume weakness.”

“I urge my Democratic and Republican colleagues to announce as soon as possible a sanctions regime against Russia’s aggression for the whole world to see. It must be tough and must be done soon.”