Sen. Cruz Replies ‘Nuts,’ ‘Shameful,’ ‘Insane’ - and with One Emoji - to News Posted on Twitter 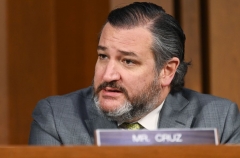 “Nuts,” was Cruz’s (@TedCruz) one-word comment on a tweet by Independent Journalist Andy Ngo (@MrAndyNgo), claiming that Twitter had forced him to censor one of his posts of what he deemed a “death threat” sent to him.

“Shameful,” Cruz replied to a Libs of Tik Tok (@libsoftiktok) post noting that a reporter had been contacting doxed contributors via a crowdfunding site (which has frozen the donations) to members of the Freedom Convoy protest in Canada.

NOTE: The reporter, Bryan Schott,(@SchottHappens) has since issued a public apology in a post on his Twitter page.

“This…is…insane,” the senator tweeted, commenting on the double-standard of crowdfunding sites noted in a post by Outkick Founder and Radio Host Clay Travis (@ClayTravis).

Two minutes later, without comment, Sen. Cruz retweeted a post by The Media Research Center (@TheMRC) of a story by its MRCTV division (@MRCTV), which details the news Cruz had referenced in his previous tweet.

And, apparently at a loss for words to describe his reaction to the little-or-no bail policies in liberal-run cities criticized in a tweet by National Journal Columnist Josh Kraushaar (@HotLineJosh), Sen. Cruz replied with nothing more than an emoji, which Twitter describes as “Down pointing backhand index” finger.