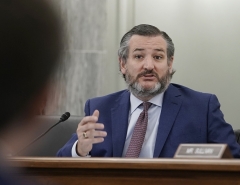 “This leak is the most egregious violation of trust at the Supreme Court in the history of our nation,” Sen. Ted Cruz (R-Texas) told his fellow senators on Thursday, commenting on the leak of a draft opinion signaling the High Court’s intention to overturn the Roe v. Wade decision, which legalized abortion nationwide.

The leak isn’t just unprecedented, it undermines some of the nation’s founding principles, Cruz warned:

“It has never happened, even once, that a draft opinion the leaks from the Court before it issues in over two hundred years of our nation’s history.

“It is difficult to describe, particularly to those who have not worked with the Court, or practiced before the Court, the level, the magnitude of breach of trust this leak represents.”

Because of its violation of trust, the leak may have made it impossible for the Court to continue its tradition of justices negotiating in private before reaching a final decision, Cruz says:

“The way the Supreme Court works, an initial opinion circulates – but, there are hundreds, and sometimes thousands, of changes as the justices negotiate back and forth.”

Sen. Cruz says the leak may have irreparably damaged the Supreme Court:

“If that process can be circumvented by one unethical, criminal law clerk – and I think the odds are overwhelming this was a law clerk who handed this over to a reporter – it does, possibly, permanent damage to the Supreme Court.”