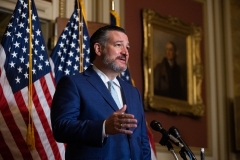 By refusing to enforce a federal statute prohibiting efforts to intimidate judges by visiting and protesting at their homes, the Biden White House is giving the green light to those trying to terrorize and influence Supreme Court justices, Sen. Ted Cruz (R-Texas) says.

The recent leak of a Supreme Court draft decision signaling that the justices intend to overturn Roe v. Wade is an effort by the radical left “to bully and pressure the justices to change their vote,” Cruz said Monday in an interview on Fox News Channel's “Hannity.“

“The Biden White House is giving people a green light to threaten and intimidate Supreme Court Justices. It’s wrong,” Cruz tweeted, introducing a video clip from his interview. “We need to protect our institutions, our Constitution, and the Bill of Rights.”

“Immediately after the leak, you saw left-wing groups publicizing the home addresses of the justices,” Cruz told Fox News. “And, we’re now seeing angry, left-wing protesters going to the justices’ homes, trying to terrorize them, trying to threaten them.

“Listen, someone comes to your home – that’s where your children are. That’s where you and your spouse sleep,” Cruz said, calling the protests a means of threatening justices.

And, by refusing to enforce the law, Biden’s White House is “giving the green light to threatening and trying to intimidate the justices,” Cruz says:

“And, you know, there is a federal statute that makes it a crime to protest at the home of a judge while a case is pending, because they don’t want people threatening judges in the administration of justice.

“And, the White House is giving the green light to threatening and trying to intimidate the justices.”