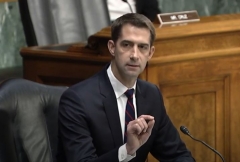 “I could’ve saved the taxpayer the travel expense” of sending Vice President Kamala Harris south of the border in search of the “root causes” of illegal immigration, Senator Tom Cotton (R-Ark.) said Tuesday at a Senate Judiciary Committee hearing discussing the House-passed American Dream and Promise Act of 2021 (H.R. 6).

While Democrats claim the bill is necessary to grant amnesty to children brought to the U.S., through no fault of their own, who “have never known another country,” it would actually give amnesty to 18 year-old illegal aliens who broke into the country as recently as last December, Sen. Cotton said:

“The House bill would give a green card, though, to, say, an 18 year-old who arrived here in December. So, that’s very different than what Sen. Coons portrayed or what the Democrats portray that this legislation would do. And that’s why this meeting itself is so ill-advised. We have a crisis at the border: illegal migrant flows that we haven’t seen in a generation.”

What's more, the vice president didn’t have to travel far in search of the “root causes” of illegal immigration, because they’re “right up the street” at the White House, Sen. Cotton said:

“The vice president gallivanted around Central America and Mexico last week looking for the ‘root causes.’ I could’ve saved the taxpayer the travel expenses – the root causes are right up the street at 1600 Pennsylvania.

“It’s Joe Biden and Kamala Harris running on an open-borders campaign, that message being heard across the world and hundreds of thousands of illegal aliens showing up at our border. Not just from Mexico and Guatemala, but literally all across the world to include Europe and Africa and Asia, because they know that our borders are open.”