Sen. Cotton: Disinfo Board ‘Only Paused Because the American People Found Out About It;’ Gabbard: Beware New Iterations 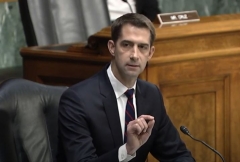 Public awareness is what prompted the DHS to pause its new Disinformation Governance Board, but Democrats might try to bring it back in other forms unless Congress acts, Senator Tom Cotton (R-Ark.) warned Wednesday.

The outcry against the board began after Department of Homeland Security (DHS) Secretary Alejandro Mayorkas referenced it in passing during a House subcommittee hearing last month. On Wednesday, the White House confirmed that the board has been paused – but, that its work to combat so-called “misinformation” and “disinformation” would still be performed by other (unnamed) DHS entities.

“I’m glad to know that this Orwellian Ministry of Truth is at least paused for the moment, but I think it’s important to realize that it’s only paused because the American people found out about it,” Sen. Cotton said in an appearance on Fox News Channel’s America Reports.

It’s not the job of the government – especially, the Department of Homeland Security – to try censor or label free speech, especially since Democrats often consider anything they disagree with to be either misinformation or disinformation, Cotton said:

“The government has no business refereeing disputes engaged in political campaigns or public debates. If you don’t like someone else’s speech, the solution is more speech. It’s not to use the Department of Homeland Security, for goodness’ sake, to try to censor or label someone’s arguments in the public sphere.

But, even if this board is permanently dismantled, there remains the threat that similar anti-free speech government entities might be created, unless they’re outlawed, Cotton said:

“Congress needs to act in the weeks ahead to ensure that it – and nothing like it – can ever be created again in the future.”

Former Democrat presidential candidate Tulsi Gabbard issued a similar warning on Thursday, tweeting that Americans need to beware that a new government “Ministry of Truth” might be created, using a different name:

“Freedom requires vigilance. The vigilance of courageous Americans has forced the Biden Admin to ‘pause’ the Ministry of Truth (Disinformation Board). We must not allow them to reactivate this propaganda arm (with new name/leadership?)”

Indeed, when White House Press Secretary Karine Jean-Pierre confirmed Wednesday that the Disinformation Governance Board had been paused, she repeatedly added that its work would continue to be performed by the DHS.

But, unlike DHS Sec. Mayorkas, the press secretary did not say which groups in the DHS would continue to combat what the government considers to be misinformation and disinformation:

“[T]he department’s work across several administrations to address disinformation that threatens the security of our country is critical, and that will indeed continue.”

“The department’s work across several administrations to address disinformation that threatens the security for our country is critical and will continue, so that work will continue.”