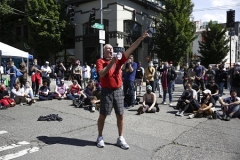 “Due to ongoing violence and public safety issues in the East Precinct/Cal Anderson Park area. Mayor Jenny Durkan has issued an executive order to vacate the area. Seattle police will be in the area this morning enforcing the Mayor’s order.”

“This order, and the police response in the area, comes after weeks of violence in and around the CHOP, including three shootings, resulting multiple injuries and the deaths of two teenagers,” the Seattle Police Department reported.

Mayor Durkan’s order authorizes police to arrest those who refuse to leave the CHOP zone, which has been closed to the public:

“The Seattle Police Department shall enforce this closure and provide dispersal orders for anyone refusing to vacate the area immediately. Persons who refuse or intentionally fail to obey this closure order to move and disperse from the area shall be subject to arrest.”

Mayor Durkan's order comes three days after protesters marched to her home to voice their demands.

During the evacuation, the Seattle Police Department has been providing updates on arrests and enforcement efforts on its Twitter page.

“Officers are investigating several vehicles circling the area of today’s operation. Police have observed individuals in the vehicles with firearms/armor. The vehicles also appear to be operating without visible license plates.”

“Officers enforcing today's order are wearing a higher-level of protective gear. Police are utilizing this equipment because individuals associated w/the CHOP are known to be armed and dangerous/may be associated with shootings, homicides, robberies, assaults &other violent crimes”

“Enough is enough,” Seattle Police Chief Carmen Best said Tuesday in a statement regarding the violence and the mayor’s order:

“As I have said, and I will say again, I support peaceful demonstrations. Black Lives Matter and I too want to help propel this movement toward meaningful change in our community.

“But enough is enough.