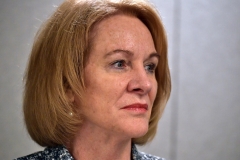 Seattle’s CHOP protesters “put families and children at risk” by going to her home, Mayor Jenny Durkan suggested on Sunday after a city councilmember led the protesters to the mayor’s “confidential” address.

UPDATE: On Wednesday, Mayor Durkan issued an order requiring protesters to immediately vacate the CHOP zone and directing police to begin arresting anyone who refuses to leave.

The protesters went to Durkan’s home “to bring the demands of the movement” to the mayor, one demonstrator told KING-TV.

“Seattle can and should peacefully demonstrate but should not put families and children at risk,” Mayor Durkan said Sunday night in a statement reacting to the protesters’ visit to her home, adding that Councilmember Sawant led the group to her home “without regard for the safety of the Mayor and her family”:

“Mayor Durkan and her family are in the state program to keep their address confidential because of the death threats mostly related to her work as Seattle’s U.S. Attorney under President Obama. Instead of working to make true change, Councilmember Sawant continues to choose political stunts.

“Tonight she did so without regard for the safety of the Mayor and her family. The Mayor was not even home — she was working at City Hall. Seattle can and should peacefully demonstrate but should not put families and children at risk.”

Three people have died since Mayor Durkan declared the CHOP occupation a “summer of love” – but, now that the protest has come to her home, Durkan believes the movement has gone too far, PJ Media writes in reaction to the mayor’s comments:

“So it’s fine with Mayor Durkan if you are subjected to threats and have your free speech and other constitutional rights violated for days and weeks on end. She has allowed this condition to fester for thousands of Seattle residents.

“But show up to protest on her doorstep? That’s going too far.”