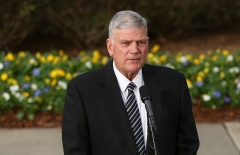 Rev. Franklin Graham is urging Americans to pray that God’s will be done in the ongoing elections, especially since the “the enemies of God” may be perpetrating voter fraud.

As batches of ballots, overwhelmingly cast for Democrat president Joe Biden, began suddenly appearing after polls closed on Tuesday, Republicans have expressed concern that election fraud may be taking place.

On Wednesday morning, Rev. Graham took to Twitter to call on Americans to pray that efforts of God’s enemies will be thwarted:

“I ask that you continue to pray for our nation and this election. Many fear that some are trying to steal the election, so join me in praying that the will of God would be done. Pray that the enemies of God would be quieted and that all their plans would be put to nothing.”

“Be anxious for nothing,” but seek comfort through prayer, Graham tweeted on Tuesday, as Americans waited for election results and fretted over the outcome of the election:

“Be anxious for nothing, but in everything by prayer and supplication, with thanksgiving, let your requests be made known to God;” (Philippians 4:6)”

Tuesday night, and into Wednesday morning, President Donald Trump has been tweeting about his suspicions the voter fraud is taking place, CNSNews.com reports:

"Last night I was leading, often solidly, in many key States, in almost all instances Democrat run & controlled," Trump tweeted. "Then, one by one, they started to magically disappear as surprise ballot dumps were counted. VERY STRANGE, and the 'pollsters' got it completely & historically wrong!"

"WHAT IS THIS ALL ABOUT?" Trump asked in response to a tweet saying that a ballot update in Michigan "gives Biden 100% of new votes — 128k+"

On Wednesday, Pres. Trump vowed to go the Supreme Court to prevent votes cast after Election Day from being counted:

“So we’ll be going to the U.S. Supreme Court. We want all voting to stop. We don’t want them to find any ballots at 4 o’clock in the morning and add them to the list, okay?”