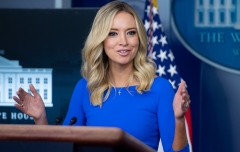 “The United States Constitution matters, even during a pandemic,” White House Press Secretary Kayleigh McEnany told reporters at a Wednesday press conference – before subjecting them to a video montage of prominent Democrats violating the very COVID-19 restrictions they’ve imposed on others.

“While Democrats politicians seek to impose Draconian restrictions against their citizens, this past week, the Supreme Court of the United States had their say on New York State’s capacity restrictions – which restricted the number of attendees allowed in places of worship, but not other government-deemed ‘essential’ businesses.”

As CNSNews.com reported, the Supreme Court last week imposed an injunction on Gov. Cuomo’s order that limited the number of people allowed to enter a church or synagogue, but not a liquor store.

“Behind me, you will see displayed images of Democrat hypocrisies playing on loop,” McEnany told reporters, detailing the following examples shown in the video:

“Quite clearly, these Democrats do not follow their own edicts. They act in a way their own citizens are barred from acting,” McEnany said.

“The images behind me make clear Democrats’ mindset: ‘Rules for thee, but not for me,’” McEnany concluded.