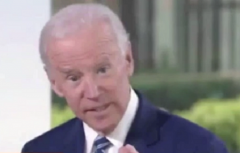 As justification for abolishing or debilitating the Senate filibuster, President Joe Biden said Thursday that the practice was grossly overused last year – but, he didn’t mention that it was almost exclusively Democrats who used it.

“It’s being abused in a gigantic way,” Biden declared in his first press conference since taking office, claiming that, last year, there were five times as many motions to break a filibuster as there were in the 54-year period from 1917-1971:

“I was going to give you the statistics, but you probably know them - that it used to be that, that from between 1917 to 1971 - the filibuster existed - there was a total of 58 motions to break a filibuster that whole time. Last year alone, there were five times that many. So it's being abused in a gigantic way.”

But, as Fox News’ John Roberts reported the next day, Democrats used the filibuster 327 times, while Republicans used it only once. Roberts took to Twitter on Friday to reveal the results of Fox News’ research:

“After @POTUS @JoeBiden denounced the rampant abuse of the filibuster last year, we did some digging. Republicans used it once. Democrats used it 327 times. @FoxNews”

“Well, first of all he said his justification for possibly getting rid of the filibuster is that it was abused last year in a gigantic way. Who was filibustering last year? It was Democrats. So he's saying, just for the record, so viewers know, there has not been one single Republican filibuster since Joe Biden took office. There have been no filibusters.”

“So, all of the filibusters in the last four years have been Democratic filibusters. What are they filibustering?” Thiessen asked rhetorically. He then listed off a host of Pres. Donald Trump’s initiatives that Democrats blocked, or threatened to block, with the filibuster:

“All those things were blocked, either by an actual filibuster or the threat of filibuster – by Democrats. And, that is now justification, once they have become in power, for getting rid of it, when the Republicans haven’t even filibustered, yet,” Thiessen said.