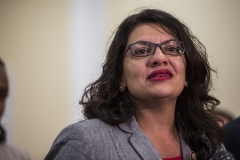 If President Donald Trump weren’t white, he’d certainly be convicted and removed from office by the Senate, Rep. Rashida Tlaib (D-Michigan) suggested in an interview with after the House voted to impeach the president for a second time.

Trump’s conviction by a Senate trial would be a certitude if he looked like her or President Barack Obama, Tlaib claimed in an interview with Democracy Now!:

“He has truly sent us on a dangerous path that I don’t think is going to go away very easily, even after he leaves office.”

It’s important for the Senate to convict Trump in a Senate trial - and punish those who support and enable him – because he’ll continue to be extremely dangerous “even after he leaves office,” Tlaib said:

“I think it’s really important to understand just how dangerous this man is - even after he leaves office.

“He has spewed out this agenda, that I don’t think is going to go anywhere. I think he is going to continue to lead this type of, what other people are calling insurrection. I call it violent attacks on our country.

“And, so, I think it’s really important that we, as a country, realize accountability is extremely important here, from those in Congress that enabled him, from those that continue to support him, that they all need to be held equally accountable, as well as Donald Trump.”