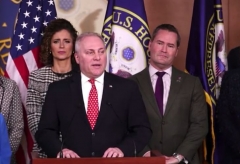 “If you were even grading on a curve, Joe Biden would get an F for failure, House Republican Whip Steve Scalise (R-La.) said Thursday, responding to the president’s claim that he has outperformed expectations in his first year in office.

“I didn’t overpromise, But I have probably outperformed what anybody thought would happen,” Pres. Biden said Wednesday in a press conference defending his first year’s work as commander-in-chief.

But, Rep. Scalise voiced a different take, the listing ways that Americans are worse off now, due to Biden’s policies, than they were at the end of his predecessor’s term in office.

When Biden took over for Donald Trump as president, COVID vaccines and therapeutics were on the brink of approval, the economy was poised for a strong recovery and America enjoyed both border and energy security, and there were peace accords between Israel and Muslims nations, Scalise said.

“And what did President Biden say yesterday to give an accounting for this last year? He literally just doubled down on all of the failures that we’ve seen this last year,” Scalise said.

Biden’s first year deserves a failing grade, even when graded on a curve, Scalise said:

“If you were even grading on a curve, Joe Biden would get an F for failure, and it’s the American people that he’s failed. Those hardworking families that go to the grocery store and are paying twenty percent more for bacon, and he doesn’t think that’s a problem.”

“When you look at the border crisis, where now every state in the nation is a border city and community, because you’ve got drugs coming in across our borders, and now fentanyl and other drugs killing people in every community in America, because Joe Biden not only stopped building the wall, but sent a message all across the world, not just South and Central America, that our border is open.”

When it comes to energy, Americans are longing for the good old days – a year ago – when gas cost them less than two dollars a gallon, Scalise said:

“Joe Biden kills the Keystone pipeline, sends a message that he doesn’t want America to be energy secure. And it wasn’t because he was against pipelines or fossil fuels, because he greenlighted the Nord Stream 2 pipeline so that [Russian President] Putin could have more leverage over Europe.”

“Weakness has consequence. We saw that in Afghanistan… And by showing that weakness, it has costs all around the world,” Scalise said, accusing Biden of showing weakness on the international stage.