Rep. Scalise: When It Comes to High Gas Prices, Pres. Biden Is ‘Throwing Spaghetti at the Walls, But Nobody Is Buying It’ 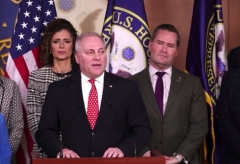 “This is a disturbing pattern we've seen from President Biden, on so many of the problems that he's created that are hurting families, is that he just blames everybody else,” House Minority Whip Steve Scalise (R-LA) said Friday.

“Maybe, they don't have mirrors in the White House, but he's looking around and he's pointing fingers,” Rep. Scalise said in an interview on Fox News Channel:

“He's throwing spaghetti at the walls, and nobody is buying it, because they're watching his policies destroy so many parts of the fabric of the country.”

While gas prices have more than doubled since Biden took office, “Look at the long list that he's blamed instead of himself for that,” Scalise said:

“It was the oil companies.

“It was the pandemic.

“He supported a bill that passed by Speaker Pelosi to allow you to sue your local gas station if you don't like the price.”

“The only thing they haven’t done is support increasing production in America,” Scalise said.

Scalise criticized Pres. Biden for flying fifty-seven hundred miles on Air Force One to Saudi Arabia to ask that the country increase its oil production.

“Who knows what’s the carbon footprint of that flight’s going to be?” Scalise asked. Instead, Biden could skip the flight and simply ask American companies to produce more oil, which they would gladly do, Rep. Scalise said.