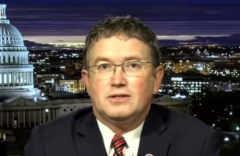 On Monday, Massie tweeted that he has reintroduced HR 899 in an effort to improved education in America.

“The bill is one sentence: ‘The Department of Education shall terminate on December 31, 2022,’ Rep. Massie tweeted. Rep. Massie originally introduced the bill back in 2019.

The bill – which has more co-sponsors than it has sentences – has been referred to the House Committee on Education and Labor.

Rep. Massie lists the following original co-sponsors of his bill:

"Unelected bureaucrats in Washington, D.C. should not be in charge of our children’s intellectual and moral development," Rep. Massie said in a statement announcing the bill. States and parents should have the say about education in their areas, Massie added:

"States and local communities are best positioned to shape curricula that meet the needs of their students. Schools should be accountable. Parents have the right to choose the most appropriate educational opportunity for their children, including home school, public school, or private school."

The Department of Education (DOE) was first created in 1867 to collect education data – but was demoted to a mere “office” because of fears it would have too much power over local schools, DOE’s website explains:

“Its origins goes back to 1867, when President Andrew Johnson signed legislation creating the first Department of Education. Its main purpose was to collect information and statistics about the nation's schools. However, due to concern that the Department would exercise too much control over local schools, the new Department was demoted to an Office of Education in 1868.”

DOE also highlights its massive expansion, from a four-person staff to one of more than four thousand wielding a budget of tens of billions of taxpayer dollars: