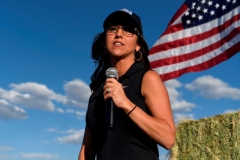 “The Left attack women who are too strong for their liking every single day, then claim there’s a ‘war on women,’” Rep. Lauren Boebert (R-Colo.) says.

“Well, there is, but they’re the ones leading it!” Boebert added in a Tweet thanking Rep. Matt Gaetz (R-Fla.) for explaining how the Left is even more hostile to conservative women than it is to conservative men.

In an interview with Real America’s Voice on Sunday, Rep. Gaetz said that the Left is threatened by Republican women, like Boebert, who don’t conform to liberals’ “identity politics” stereotypes:

"Congresswoman Boebert made, as a part of her campaign, that she embraced her Second Amendment rights and that she utilized them for her defense, for the defense of her business and her employees. And they [Democrats] were so threatened by this Republican woman.

“And, Steve, the Republican women in Congress get it way worse than the men because of the identity politics and they assume that if you're a mom in regular America, you ought to be with them."

"Republican women in Congress get it way worse than the men because of the identity politics and [democrats] assume that if you're a mom in regular America then you ought to be with them."@RepMattGaetz & @laurenboebert discuss democrats' awful treatment of conservative women. pic.twitter.com/slODLtiC3d

"And, so when they see someone who is a firebrand, who is a spark plug, who is a jolt of energy that we need in the Republican caucus, they come after her specifically.

“And they literally built the infrastructure of making sure that you have the metal detectors outside of the Chamber because of this person and her views.”

As Fox News reported, Pelosi has claimed that members of Congress exercising their Second Amendment rights pose a threat to other House members:

In January, House Speaker Nancy Pelosi, D-Calif., ordered security officials to install magnetometers at each entrance to the House chamber after the Capitol riot. Pelosi said lawmakers were concerned about fellow lawmakers "being a danger" to one another, adding that "the enemy is within" the House.