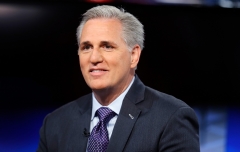 “Speaker Pelosi’s rejection of the Republican nominees to serve on the committee and self-appointment of members who share her pre-conceived narrative will not yield a serious investigation.

“The Speaker has structured this select committee to satisfy her political objectives. She had months to work with Republicans on a reasonable and fair approach to get answers on the events and security failures surrounding January 6.”

McCarthy notes that the Senate has already conducted and concluded two separate bipartisan investigations of the January 6 invasion of the U.S. Capitol.