Rep. Jim Jordan: ‘We've Got to Get to the Bottom of this Whole DOJ, FBI Going after Parents’ 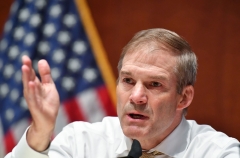 Given that the DOJ’s designation of parents as a threat and the FBI’s mistreatment of Pres. Trump and his staff when he was in office, Americans need to know how the Biden Administration is using the recent advancements in spy technology, Rep. Jim Jordan (R-Ohio) warns.

“Why would we trust them with this type of technology until they clean up their house?” Rep. Jordan was asked Tuesday in an appearance on “Hannity.”

“You are exactly right,” Jordan answered, warning that the administration is now setting its sights on parents who object to school policies and curriculum:

“The same FBI that spied on President Trump's campaign, the same FBI that set Michael Flynn up four days into the administration, set him up in the White House, that same FBI which we now know is spying on moms and dads that simply have the audacity to show up at the school board meeting and speak out against its curriculum, that same FBI, the leadership of it now has this amazing technology, which should only be used on terrorists.

“That is our concern. No one has any problem using this on terrorists.

“Our concern is: are they going to use it on us? We know what they have done to parents, putting a threat tag label on parents, so this is frightening and I would ask a simple question, Sean, what if Peter Strzok had this for years ago? You know, Peter Strzok who said ‘I can smell the Trump supporters at the Walmart.’”

If Republicans regain control of Congress in November, they will launch an investigation into potential surveillance of parents and other abuses, Rep. Jordan promised:

“Yeah, we've got to get to the bottom of this whole DOJ, FBI going after parents. I mean, but for that whistle-blower coming forward and telling us they are putting this threat tag designation on parents. Are they going to use the spyware technology on the same parents who now have a threat tag label on them?

“So, that is something we definitely have to get on the bottom of – and a whole other number of investigations that we also have to have.”