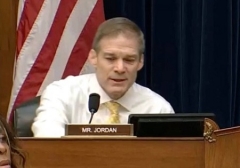 House Speaker Nancy Pelosi’s (D-Calif.) committee to investigate the invasion of the Capitol on January 6 won’t address a crucial question, and Rep. Jim Jordan – who Pelosi refused to seat on the commission – says he thinks he knows why.

On Wednesday, after Pelosi refused to allow Republican appointees, Rep. Jordan and Rep. Jim Banks (R-Ind.) to serve on the committee, Jordan told reporters that Pelosi and her committee have no intention of addressing the question of why security was so lax at the U.S. Capitol on the day of the attack.

Pelosi, Jordan said, is the only one who can answer that question – and he believes she won’t because Democrats spent all last year normalizing and enabling the type of criminal behavior that took place at the Capitol:

“And, only one person can answer that question; only one: the speaker of the United States House of Representatives. My hunch is, my hunch is the reason they don’t want to address that question, my hunch is, is because, what happened all last year? The Democrats normalized anarchy. They normalized rioting and looting.

“They went out and raised money to bail them out of jail and they continue to talk about defunding the police – and, in fact, did that in all these major urban areas, which is why crime is up.