Rep. Jim Jordan Blasts Biden-Big Tech Censorship: ‘If You Can’t Talk, What Do the Rest of Your Rights Mean?’ 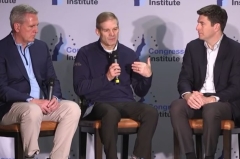 Last July, Press Secretary Psaki announced at a press conference that the Biden Administration is “flagging posts for Facebook" that the administration would like censored, a comment Sen. Josh Hawley called “really scary,“ given that it came from the federal government:

"I think it's really scary to have the federal government of the United States, the White House, compiling lists of people, organizations, whatever, and then going to a private company that, by the way, is a monopoly, Facebook, and saying: You need to censor. You need to do something about this. You need to tell these users, these private users on a private company what they can or cannot say."

At a press event on Friday, Rep. Jordan recalled that, at the time, he thought Psaki’s comment didn’t seem right to him. But now, he considers her words “very scary,” because, if free speech on social media can be denied, other types of free speech and liberties are at risk, as well:

“I’m like, ‘Wait, something doesn’t seem right about this.’ You got the press person in the White House in the press room making those kind of statements.

“If you can’t talk, what do the rest of your rights mean? I mean, can you really practice your faith? And so, this is the concern Americans have.  And, whether it’s Big Tech, whether it’s the Cancel Culture mob coming after people who don’t speak what the woke mob thinks is appropriate – this is very scary.

“And so, you add to that concerns about other liberties. You add to that this debate where some say government knows what’s best for kids, versus moms and dads directing the upbringing of their children’s education.”